Posted by Ken Peterson in Uncategorized on March 24, 2012

The Compline Choir was privileged to sing during the world premiere performance of Pietà by Seattle-based composer John Muehleisen  on Wednesday, March 14, 2012 at St. Mark’s Cathedral in Seattle.  The work was commissioned by Seattle’s Choral Arts, directed by Robert Bode, and was  appropriate to the contemplative time of Lent in the Christian calendar.  This is a stunning composition, with its many layers: musical, textual, and spiritual.

Pietà’s inspiration is rooted in the word itself, which in its more profound meaning is “compassion” or “mercy”.  Evoked by the Michangelo statue, we think of “Pietà” as the image of a mother holding her dead son; in Muehleisen’s work, this image is portrayed through three timelines: (1) the Passion, Burial, and Resurrection of Jesus; (2) wartime poetry of loss and grief; and (3) the need for compassion in our own day.  Each timeline is emphasized in two of the six sections of the work: (1) the relationship of Mary and Jesus in Scene Three (Calvary) and Scene Four (Pietà); (2) mothers and sons in general in Scene One (The Son) and Scene Two (The Mother); and (3) the grief and loss felt by all of us and the call to mutual compassion and love for one another, in Scenes One and Six (Prologue and Epilogue).

The musical performance of Pietà involved three choirs, two wind instruments, tenor and soprano soloists, and percussion.  Choral Arts, an SATB chamber choir, was positioned in the front of St. Mark’s Cathedral, along with the two instrumentalists (oboes and English horns) in the center, flanked by the tenor and soprano soloists.  Off to the right were timpani, vibraphones, tubular bells, gong, and cymbals, played by two percussionists.  In the choir loft behind the audience was the Seattle Girls’ Choir Prima Voce ensemble, which became a symbol of the divine nature of Jesus, as opposed to the human nature portrayed by Choral Arts.  The Compline Choir was located between the two groups, in the rear of the cathedral in a semicircle around the baptismal font, and underneath the organ positiv division, which hangs off the front of the choir loft.  Compline Choir’s role was as the “Chanters” — singing traditional two- and four-part Orthodox chants, which set the stage for each Scene and sometimes carried the Passion narrative.  The plaintive sound of the oboes/English horns, inspired by the Bach St. John Passion, provided a musical motive of “compassion” throughout.

A moving combination of texts is used to portray grief, loss, and compassion: among them poems by Wilfrid Owen, William Blake, and Rudyard Kipling; words from Martin Luther King, the Stabat Mater, and a homily from the Requiem Eucharist and Celebration of Life for Matthew Shepard.  Particularly beautiful was the text of Mary’s “Lullaby” from Scene Four (Pietà), which was written by Choral Arts’ director, Robert Bode (I hope eventually to have a link to the musical excerpt):

Lullay, lullay, little One,
Such a gift as God’s own Son:
Come to Earth
Our hope to be,
Sleeping soft upon my knee.

Heu!, heu! martyred One,
Such a gift as God’s own Son:
Come to Earth
To broken be,
Hung so cruel upon a tree.

Ave!, ave! Holy One,
Such a gift as God’s own Son:
Lying still
Upon my knee,
In my arms, forever free.

The juxtaposition of sleep and death in the Lullaby is one of the foundational ideas behind Compline – our preparation for sleep at the end of the day reminds us of our preparation for end of life.  Muehleisen’s use of the Compline texts Nunc Dimittis and the chant “Into Thy hands I commend my spirit” underscored this connection.  The idea that in death we release our fears and anger, inspires us to do this in the present — as one Zen master says, “Why don’t you die now, and enjoy the rest of your life?”  It is this ego-death that enables us to live compassionately in the now.

If you want to find out more about the Pietà, John Muehleisen has written extensive program notes at the Choral Arts website.  John came to our Compline rehearsal and service several months ago, and expressed the desire at that time to write a guest blog about his experience for the Underground.  I look forward to it. 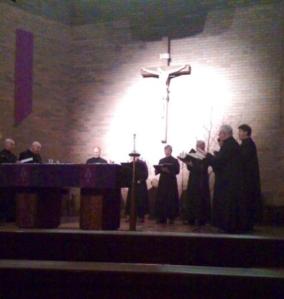 For those of you unfamiliar with the Seattle area, Bainbridge Island lies to the west of Seattle, and one gets there the fastest by hopping on a ferry and taking a 30-minute ride across Puget Sound.  Here is a description of the choir sent to me by its director. Bill Pelandini:

The St Cecilia’s Compline service is essentially the same as that sung at St Mark’s, with a couple of notable exceptions and additions.  In consideration of its host Roman Catholic parish, we amended the service to include a silent Confiteor at the beginning, added a second psalm and shortened the responsories slightly.  The service is sung in a darkened church without accompaniment. Unlike St Mark’s, the group sings from the front of the church, under the cupola over the sanctuary, which allows us to take full advantage of the acoustics.  Attendance over the years has been a consistent 50-75 – not a bad showing in a small community such as ours.

Unlike other groups, our association with Peter Hallock and the St Mark’s Compline Choir came a few years after we began.   In early 1996, we invited Peter to present a workshop for the group.  He started the session with an hour’s reflection on the history of Compline and the importance of the psalm as the spiritual center of the Office.  From there, he tackled some much needed work on vocal production, the essentials of ensemble singing and general principles of musicality.  It was an eye(ear)–opening experience that has shaped and influenced our choir ever since!  Shortly thereafter, Bill was asked to join the St Mark’s group, where he spent 14 years learning more and more from Peter, and, after Peter’s retirement,  Jason Anderson.  In the process, we became part of the “Compline Choir family,” and we continue to  look to the ‘mother choir’ for inspiration and support.

Congratulations, Bill on your 20 years, and for being the first group to chant Compline on a regular basis in a Roman Catholic parish!