Christus Surrexit and an Anniversary

Posted by Ken Peterson in Compline, Easter on April 27, 2019

Volunteer Park, Seattle, April, 2019 – a beautiful spring day, Monday of Holy Week, with the Conservatory in the distance…

It brought back memories of five years ago, when I blogged about walking in Volunteer Park after learning about the death of my mentor and friend, Peter R. Hallock, on Sunday, April 27, 2014.

And Sunday, April 28, 2019 will be almost five years to the day since that previous walk in the park, as well as the same liturgical day – the Second Sunday after Easter, “Quasimodo Sunday” (read more about that in the link above). How ironic — when Notre Dame Cathedral and its famous hunchback have been in the news of late. 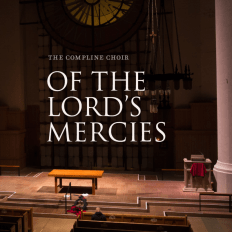 On Easter Sunday, the Compline Service began, as it has for more than three decades, with Peter’s processional “Easter Canticle.” The piece has now been recorded on CD for the first time in the choir’s new CD Of the Lord’s Mercies, just released. The CD is described as “a sonic journey through the arc of what Western Christendom calls the Paschal Cycle, encompassing the seasons of Lent, including Holy Week, and Easter, culminating on Pentecost: The 50th Day of Easter.” Previously, the choir had recorded  What Hand Divine, comprising music for the Christmas Cycle (Advent, Christmas, and Epiphany) – so the new CD is a natural sequel. Both recording’s title tracks are taken from works by The Compline Choir’s composer-in-residence Erin Aas (b. 1974).

The anthem at Compline on Easter Sunday was Jacob Handl’s “Christus Surrexit,” which is also on the new recording. This year, Jason Anderson made our performance especially exciting, by inviting half the singers on each part in the tutti sections to sing in a staccato fashion. The result certainly made the melodic lines stand out with excitement! I think the effect out in the cathedral was especially stunning – although it may have been a little too marked to the radio audience due to the closeness of the microphones. But see what you think – the anthem is introduced, with translation of the Latin, by one of our excellent readers, Gregory Bloch:

To hear the podcast of the whole service, go here. You might want to compare the performance of Christus Surrexit with that in last year’s post, or that on the new CD.

Posted by Ken Peterson in Uncategorized on April 18, 2019

In a week where many Christians are focused liturgically on the suffering and death of Jesus Christ, the singing or reading of the Lamentations of Jeremiah is heard during the daytime prayers of Holy Thursday or Good Friday, or during the service of Tenebrae, as the candles are symbolically extinguished. During Lent, the Compline Choir at St. Mark’s, Seattle has a tradition of singing settings of the Lamentations, which are usually by Renaissance composers.

Early in the week came the disastrous fire at Notre Dame Cathedral in Paris, inspiring numerous lamentations and prayers. My friend Jim Friedrich posted photographs he had taken of the cathedral with quotes from the Lamentations, in his “Lamentation for Notre Dame.”

Last Sunday the Compline Choir sang the second part of the Lamentations of Jeremiah by Thomas Tallis. It was an ambitious undertaking, which lasted almost 13 minutes. The Compline Service broadcast probably set a record, lasting almost 45 minutes, and can be found here. There was some wonderful music, including the Vexilla Regis setting by Franz Liszt (with organ), but I’ve extracted the performance of the Lamentations, with the Latin text and translation. The choir provided what I think was (in my memory) one of the most inspired performances of the Lamentations.

Wishing you a good week and a happy Easter to come!