Posted by Ken Peterson in Uncategorized on September 26, 2012 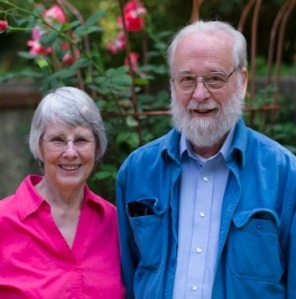 On September 15, the Compine Choir from St. Mark’s Cathedral, Seattle, had a party at the home of our founder, Peter Hallock, for both current choir members and alumni. Our special guests of honor were Bill and Roxy Giddings; Bill will be retiring from the Compline Choir after the September 30 Compline Service, 53 years after he started singing with the choir.

After earning a doctorate in Chemistry at Harvard University in 1959, Bill came to Seattle for post-doctoral work at the University of Washington. Whle in Boston, he had pursued his musical avocation as organist for a service for students at Christ Church, Cambridge, and very soon after his arrival was introduced to Compline by Al Campbell, an organist at Christ Church, Seattle, who sang in the Compline Choir.

Bill was introduced to his wife-to-be, Roxy, after the Compline Service, by a mutual friend who was an organist and choir director.  They were married at Mt. Cross Lutheran Church in University Place, WA on June 18, 1961.  After two years teaching chemistry at Albion College, Bill got a position at Pacific Lutheran University, near Tacoma, in 1962, where he taught until his retirement in 1998.

I first met Bill and Roxy in 1964, when as a student without a car, I hitched a ride with them to Seattle to sing Compline; the 30-mile trip was somewhat lengthier in those days before the completion of Interstate 5. I did get a car the next year, and with the installation of the Flentrop Organ in the fall of 1965, Bill began to “curate” the organ after Compline, either playing it himself, or assisting guest musicians to find their way around the instrument – a labor of love which he has carried on to the present day. Read about this wonderful tradition in my blog entry, “Post-Compline Organ Music”, from February 2011.

For over five decades, Bill has held down his post in the alto section, and Roxy has driven up with him every Sunday night – an amazing accomplishment for both, when, if one were to only count 50 years of commuting every week from Seattle to Parkland, would be 2600 Compline Services, and round-trips equal to about 213,200 miles! For many of those years they drove a Checker, with either a “KYRIE” or “ELEISON” licence plate.

Bill will be back to sing with the Compline Choir for the installation of the new Dean of St. Mark’s Cathedral, Steve Thomason, on October 13, and for a special Compline Service on November 25, in which we will be doing a service of Peter Hallock’s music with choir and alumni in honor of Peter’s 88th birthday. We look forward to seeing them back often. They have given us a really wonderful example of faithfulness and the Benedictine virtue of stability.

O Food to Pilgrims Given

Posted by Ken Peterson in Uncategorized on September 12, 2012 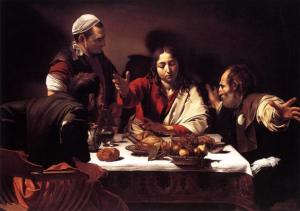 It’s been a long hiatus since my posting in May, but I’ll try to make up for it in the coming weeks. First, I wanted to share some great news: the book I have been writing, Prayer as Night Falls: A Journey with Compline, has been accepted by Paraclete Press. I will be getting the completed manuscript to Paraclete in January; hopefully it will be published next year! More about that over the next few months…

There were so many wonderful things to write about Compline over the past summer, but I’ll focus on one of our services in August.  Here’s a link to our podcast of The Office of Compline for August 12, 2012 (just press the play button to begin listening) . The Gospel reading for that Sunday was John 6:35, 41-51, including the words “I am the Bread of Life”, and “I am the living bread that came down from heaven. Whoever eats of this bread will live forever…” This reading always reminds me of the story of how the men walking “on the road to Emmaus” were accompanied by a stranger, who was revealed to them as the risen Christ “in the breaking of the bread.”

Jason Anderson, director of the Compline Choir, selected music that conveyed this eucharistic theme beautifully, beginning with the chant “Humbly I adore Thee, Verity unseen” (words by Thomas Aquinas). I think our singing of the hymn for the service, “O food to pilgrims given” (sung to one of the tunes of the 16th-c. French psalter), was one of the highlights for me from the summer (listen to it at about 8:55 on the podcast):

O food to pilgrims given, O bread of life from Heaven,
O manna from on high!
We hunger, Lord, supply us, Nor Thy delights deny us,
Whose hearts to Thee draw nigh.

O stream of love past telling, O purest fountain welling
From out the Savior’s side!
We faint with thirst; revive us, Of Thine abundance give us,
And all we need provide.

O Jesus, by Thee bidden, We here adore Thee,
Hidden in forms of bread and wine.
Grant when the veil is riven, We may behold, in heaven,
Thy countenance divine.

The anthem for the service was “Jesu, dulcis memoria”, written in 2009 for the Compline Choir at St. Mark’s, Seattle by Iain Quinn (listen at about 22:50 on the podcast). Three of the many stanzas of this hymn, originally written by St. Bernard of Clairvaux, are set here by the composer: